The public is invited to celebrate citizenship and the rule of law at the annual Law Day and Naturalization Ceremony, Friday, April 27 at 2:00 p.m. in Courtroom No. 1 of the Lebanon Municipal Building, 400 South Eighth Street, Lebanon.

Law Day is designed to bring judges, lawyers and schools together to teach students about the law and the legal system, and to celebrate the American heritage of liberty, justice and equality. This year’s theme is “Separation of Powers: Framework for Freedom.”

The U.S. Constitution sets out a system of government with distinct and independent branches—Congress, the Presidency, and a Supreme Court. It also defines legislative, executive, and judicial powers and outlines how they interact. These three separate branches share power, and each branch serves as a check on the power of the others. “Ambition must be made to counteract ambition,” James Madison explained in Federalist 51. Why? Madison believed that the Constitution’s principles of separation of powers and checks and balances preserve political liberty. They provide a framework for freedom. Yet, this framework is not self-executing. We the people must continually act to ensure that our constitutional democracy endures, preserving our liberties and advancing our rights. The Law Day 2018 theme enables us to reflect on the separation of powers as fundamental to our constitutional purpose and to consider how our governmental system is working for ourselves and our posterity.

The celebration will include guest speaker Christian Johnson, the dean for Widener University Commonwealth Law School located in Harrisburg, Pennsylvania.  Prior to joining Widener, Christian was a law professor for twenty years at the University of Utah and Loyola University Chicago.  Prior to teaching, he practiced law in New York and Chicago and was a CPA in Houston.   Christian’s research has focused primarily on global capital markets and banking, coauthoring five books and writing over three dozen articles.  Christian has spoken frequently on legal issues across the U.S., and in Europe, the Middle East, South America and Asia.  He received his JD from Columbia Law School (where he was executive editor of the Columbia Law Review).

During the celebration, new U.S. citizens will be sworn in, and new attorneys will be admitted to the Lebanon County Bar. The event also will include special music by students from Palmyra High School, and presentations from the Daughters of the American Revolution and the Pennsylvania League of Women Voters.

President Judge John C. Tylwalk will present an award to the winner of the Lebanon County Bar Association Essay Contest. This year’s winner is Emily Long, a senior at Annville-Cleona High School. 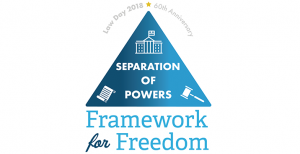